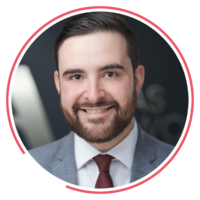 Vale Sloane is Atlas Network's Strategic Partnerships Advisor. In this role, Vale connects Atlas Network's community of donors with opportunities to support the 500+ organizations in our global network of partners. This includes providing our donors with regular updates on important partner achievements, identifying investment opportunities to support major partner projects, and keeping donors updated on how their support is making a real difference in the worldwide freedom movement.

Vale joined Atlas Network in 2016 on the Institute Relations team, where he managed relationships with Atlas Network’s global network of partners and directs various grants and awards programs. He also participated in the Charles Koch Institute's Koch Associate Program in 2016-2017. Hailing from Sydney, Australia, Vale attended the University of Sydney where he received his Bachelors of International and Global Studies (2013) and Bachelors of Laws (2015). He worked in Australian politics throughout college and after graduation, including on local, state, and national election campaigns between 2009-2015. Vale has also worked in the private sector as Business Development Manager at an eLearning company prior to joining Atlas Network. He lives in Washington, DC, and enjoys reading, traveling, and watching Netflix.