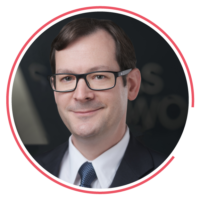 Director of Marketing and Communications

Adam Weinberg is Director of Marketing and Communications at Atlas Network, leading the content strategy of a talented team of design, publishing, video, web, podcasting, and public relations professionals serving Atlas Network and its partners.

Adam began his involvement with Atlas Network as a staff member at a partner think tank, serving for eight years as Communications Director at Platte Institute, a state policy organization in Nebraska, United States. In 2019, the group was nominated for the Templeton Freedom Award, for its efforts requiring the Nebraska Legislature to regularly review all state occupational licensing laws, and to identify less-restrictive policies for starting a job or a business.

While completing a degree in film directing at the University of North Carolina School of the Arts, Adam began working on movie sets through an internship supported by the Institute for Humane Studies. His film credits include everything from assistant directing, to production transportation, to background acting work.

Adam lives in Winston-Salem, North Carolina. He and his wife, Ana Paula, are the proud parents of Ana Carolina, who is adored by their four dogs, two birds, and a cat.