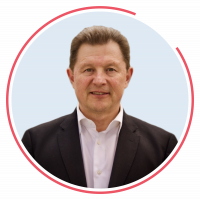 Dr. Roberto Salinas León is well-positioned to elevate the work of Atlas Network and its partners in Latin America. He is currently President of the Mexico Business Forum, as well as the President of Alamos Alliance, which was described glowingly in Forbes in 2013 as “one of Nobel Laureate Milton Friedman’s favorite retreats,” with Roberto Salinas León noted as “a major driving force of efforts for free markets.”

Roberto Salinas León holds a B.A. in political economy, history and philosophy from Hillsdale College, Michigan; and an M.A. and Ph.D. in philosophy from Purdue University, Indiana.

He is currently Senior Debate Fellow and Debate Lecturer at the Calvin Coolidge Presidential Foundation, and an Adjunct Scholar of the Cato Institute. He has organized a number of the most important policy and academic forums in the past 25 years in Mexico, including the annual Mexico roundtable of The Economist Group, which he directed from 1997 until 2009.

He has published more than 2,000 editorials (English and Spanish) on public policy topics, including op-ed pieces in The Wall Street Journal, The Journal of Commerce, Investor’s Business Daily, Barrons, and others. He was a weekly editorial columnist in El Economista, from 1993 to 2011 and now published occasional op-ed’s in different media outlets. He is an occasional commentator for CNN, CNN Latinamerica, CNCB, BBC, and others; and is a weekly commentator on economics and global finance in AND 40, in Mexico City.

He has delivered over 900 lectures in Mexico and the U.S., Canada, several countries in Central and South America, and throughout Europe and Asia. He has testified before the U.S. Congress on three occasions – on NAFTA and free trade, structural reform in Mexico, and monetary and exchange rate policy.

High-resolution headshot for media, editorial, and approved event use.