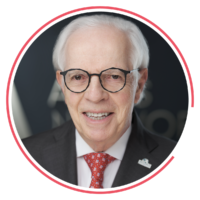 Jean-Claude Gruffat is Managing Director of Weild & Co. in New York. Previously, he was a Managing Director with Galileo Global Advisors and Citigroup, both also in New York. Gruffat is a Governor of the American Hospital of Paris, a Director of the American Hospital of Paris Foundation, and a Founder of Institut des Libertes. Gruffat is a member of the Economic Club of New York, the Union League Club, the Hong Kong Club, Cercle de l’Union Interalliee, and a board member at the Competitive Enterprise Institute. He holds a Ph.D. in Public Law and a Master in Political Science from the University of Lyon, France. He attended the Stanford Executive Program at Stanford University’s Graduate School of Business in 1987.