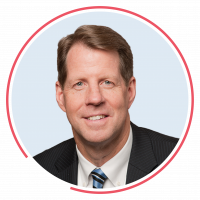 President, The Fund for American Studies

It was a chance encounter while he was a freshman at Vanderbilt University that led Roger Ream to meet TFAS founder and then-chairman David R. Jones. David encouraged Roger to attend a TFAS summer institute in 1976 and the rest, as they say, is history. Roger thinks he has the best job in the world, working with young people who want to make a difference in the world. He says it keeps him young, which may be true since he joined TFAS in 1891. Wait a minute … make that 1991. Roger joined TFAS after 15 often frustrating years thinking he could make the world a better place working in politics and public policy. He came to realize that politics is indeed downstream from culture, so changing the world required changing the ideas in the minds of young people. In 1991, he was ready to answer his mentor David Jones call to work with him at TFAS. Roger became president in 1998, following David’s untimely death.