After a daring escape from Kabul, a new mission 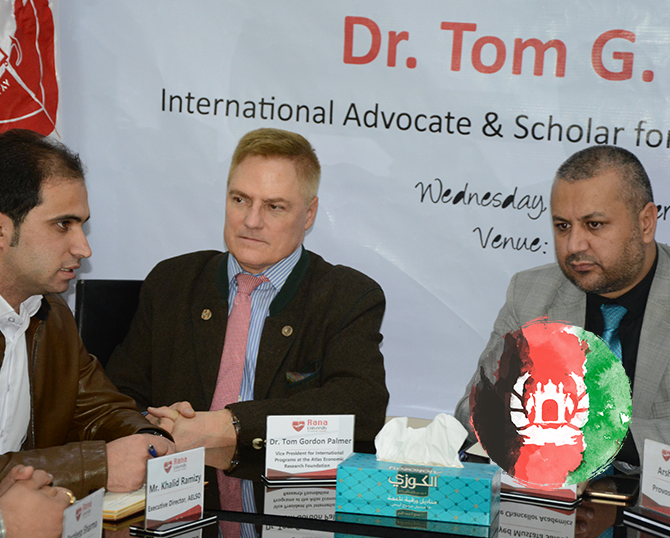 After the chaos, confusion, and suffering that accompanied the August 2021 Taliban takeover of Afghanistan, there glimmers a spark of hope.

For the two decades following the October 2001 invasion of Afghanistan, enormous sums of foreign taxpayer money were poured into the country, corrupting almost every government agency, and many of those agencies came to administer massive patronage networks. A fragile civil society emerged in the interstices, but political conflicts that might have been resolved civilly were instead swept under the rug with more foreign aid money. Even a negotiated peace with the brutal Taliban was undermined by a mixture of inept U.S. foreign policy and internal power struggles.

A brittle state came crashing down almost overnight, as soldiers and even the president deserted their posts and allowed the Taliban to occupy the entire country. Atlas Network partner Afghanistan Economic and Legal Studies Organization (AELSO) continued their work up to the end, and, after a series of harrowing experiences, its leaders managed to escape. They risked everything for the values of liberty while in the country, and they are continuing their work for reason, peace, toleration, and liberty in Afghanistan and the region.

On September 3, Khalid Ramizy, CEO of Afghanistan Economic and Legal Studies Organization, joined Dr. Tom G. Palmer and many Atlas Network partners and supporters in a Zoom conference to discuss Ramizy’s escape with his family and colleagues, what led to the collapse of the Afghan state, and what the future holds for liberty in the country. Thanks to his own quick actions and the tireless efforts of friends of liberty inside and outside the country, Ramizy was able to speak from the relative safety of the Balkan nation of Albania. He described what it was like for him to see the Taliban overrun his country in a few short weeks, the attack on AELSO’s last public event by a suicide bomber, and what it was like to go from hosting a conference on classical liberalism and human rights for hundreds of people to hurrying to his office to destroy documents.

After destroying material that might endanger thousands of participants in pro-liberty activities, Ramizy said, “I changed my location and my face with different things, with scarves, with glasses, and with different clothes, and I escaped immediately from the office to another safe place, but those were very shocking moments, very sad moments in my life.”

Getting his team to safety

Ramizy changed location repeatedly on the advice of friends with whom he was in contact over WhatsApp connections, and he was in constant touch with Atlas Network staff and regional partners. He formulated a plan to get his family out, as Taliban death squads were searching for him. Ramizy realized he needed to get his family, his colleagues, and himself out of the country as soon as possible, but that was easier said than done.

“On those days, to get inside the Kabul Airport, it was very, very difficult,” he said. “If you decided to go inside the airport, you should accept that one option is you could die; the other option is that they will allow you to enter the airport.” After an initial nerve-wracking aborted attempt, they were finally able to arrange transport to the airport.

After arranging to travel in traditional clothes that would not arouse Taliban suspicions and with no luggage beyond a small knapsack per person, Ramizy said, “I cleaned all the documents from my mobile phones, no numbers, nothing, until we entered inside the airport. And we went towards the airport. And we were very, very lucky that on the way to the airport, we didn’t get stopped too much by the Taliban checkpoints, just three, four times they stopped and they checked the bus, and they asked some questions that we were prepared to answer in a proper way, and they let us go inside the airport.”

Khalid Ramizy’s escape was a close call. Many of his colleagues, as well as many thousands of desperate people, have yet to make it out of Afghanistan. After decades of advancing the principles of an open, liberal society, of free markets, and of limited government for the varied peoples of Afghanistan, which was undermined by devastating influxes of foreign aid, AELSO’s work suddenly became more dangerous and more complicated, but Ramizy said they won’t give up.

“Our work should be continued,” he said. “We have to work more strongly with new strategies, with new ideas, with new works. There is a stronger need for our work than at any time in the past. I am in close contact with all civil society activists of Afghanistan, who are based in Afghanistan at the moment, and who are also outside of Afghanistan, and we are working closely with each other. So, we should not leave the Taliban alone or other extremist groups so they can do everything that they want.”

A network united for peace

The dedication of Atlas Network staff and partners to getting Ramizy and his colleagues out of a deadly situation is a testament to the power of our international network. Members of the global network for liberty know that they are not alone. They also appreciate the inspiring dedication of AELSO’s entire team.