Building a community with candy 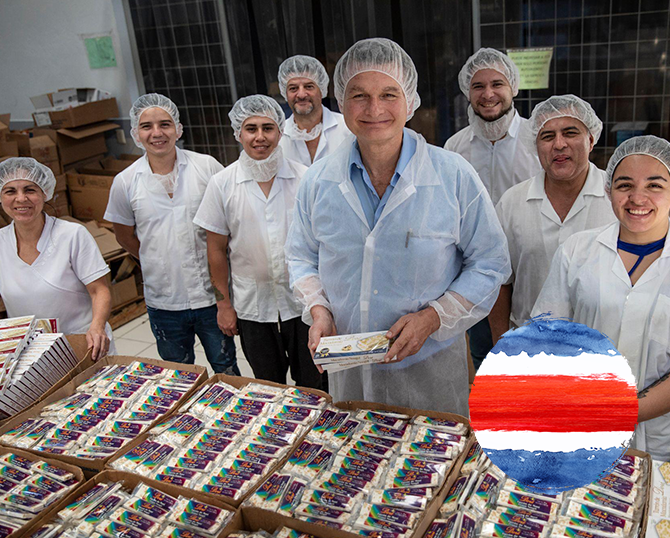 From door-to-door to its own factory

Turrones de Costa Rica—a San José-based confectionery—started as a door-to-door nougat business. Born out of financial necessity, it was so successful that it eventually grew into a full-grown business that needed its own factory. Luis Diego Soto Clausen takes great pride in the business he started so long ago as an entrepreneur just out of high school, and he has worked hard for over thirty years, both to perfect his nougat and to overcome governmental red tape that would hold Turrones de Costa Rica back.

In the small town of San Isidro in Heredia province, Soto warmly welcomed the Atlas Network team into his brightly lit nougat factory, which is filled with the tantalizing aroma of the inside of a Milky Way bar. There are seven dedicated employees in the production area of the main factory, and we watched them weighing out almonds for each batch and carefully pouring out batter into their wooden panels. This candy used to be only consumed during the holidays, but the entrepreneurial Soto started this successful enterprise with the idea of making nougats a year-round treat.

A taste of Christmas all year

The process of making nougat—a gooey candy traditionally eaten at Christmastime—can take up to four hours and requires the utmost attention to detail. A creamy mixture of egg whites, honey, and caramelized sugar sprinkled with slivers of assorted nuts is quickly poured into trays lined with thin, edible paper. The warm, sticky mass is laid flat by a heavy wood rolling pin and cut into small, delicate pieces once it cools. It’s sweet, chewy, and fills your mouth with a nutty deliciousness that is reminiscent of holidays gone by.

Known by their brand name of Turrones Doré, the demand for Soto’s sweets has skyrocketed—so like any successful business, Soto needed to expand to a larger and better equipped production facility. While many Costa Ricans had access to banking institutions, very few had access to traditional loan products—making it harder for businesses like Turrones de Costa Rica to grow with the demanding market.

As if making delicious nougat was not a delicate enough process, Soto also had to balance the burden of regulatory hurdles. It took years of persistent hard work, but his dedication and entrepreneurial skills enabled Soto to overcome government obstacles and time-consuming procedures. He eventually succeeded in securing funding for a new Turrones de Costa Rica production facility, creating new jobs in his community.

Empowering the productive potential of candy

Soto’s business is a positive good—for the entrepreneur, his employees, his customers, and his community. Recognizing that government barriers hold back the potential of ventures like Soto’s, Luis Loría and his team at the Instituto de Desarrollo Empresarial y Acción Social (IDEAS Labs), a San José-based free-market think tank and Atlas Network partner, sought to reduce those barriers.

The opportunity to build a business

Supported by over US$40,000 in grants from Atlas Network, IDEAS Labs led a widespread effort to remove barriers to doing business by working with the Ministry of Economics, Industry, and Commerce (MEIC) to design and implement policies that would help small businessmen like Soto have greater access to credit—and thus more opportunity to build their businesses. So far, their efforts have been successful. Policies designed to help small entrepreneurs are helping businesses of all sizes secure credit, expand their businesses, and provide their employees with more benefits.

Today, Turrones Doré is available in more than 450 stores across Costa Rica, Mexico, Guatemala, Nicaragua, Dominican Republic, and Puerto Rico. Soto’s expansion has allowed him to hire more employees and help them build their production skills—and in doing so, lift more fellow Costa Ricans out of poverty and empower them to realize their inherent dignity.

“We could celebrate that our work contributed to significantly ‘move the needle’ in terms of access to credit in Costa Rica, but that would not capture adequately the life-changing impact of the reforms,” explained Luis E. Loría, president of IDEAS Labs. “It is only when we look at how the creative and productive potential of individual entrepreneurs like Luis Diego is unleashed, thanks to the access to credit, that we can appreciate how dreams are transformed into realities, the unemployed find new job opportunities, and those living in poverty are able to escape from that condition and aspire to increasing levels of prosperity.”