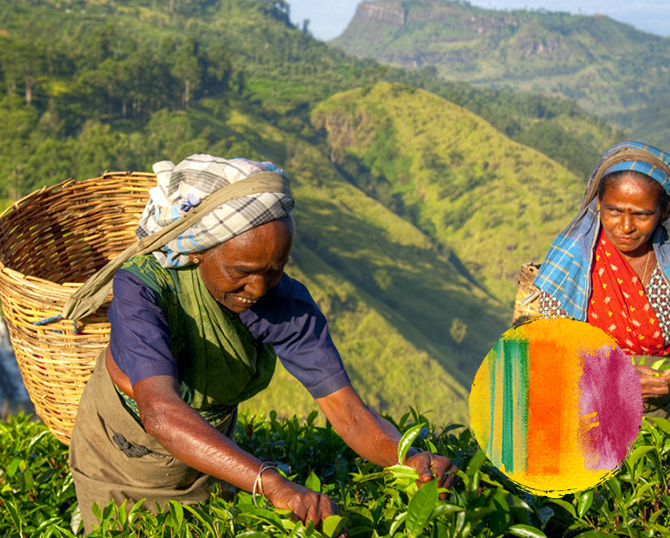 On the island nation of Sri Lanka, girls and women face cultural stigmas because of their periods. A U.N. study found 60 percent of teachers in Sri Lanka think menstrual blood is impure. Because of this, 60 percent of girls are absent from school once a month during their cycle. Women are often forced from their homes during their period—some die, others face illness. All are subject to isolation and discrimination.

In short, women are stripped of their dignity because their culture does not like to deal with the natural female menstrual cycle. This obtuse view on femininity is not only prevalent in the Sri Lankan society, but also permeates the way government levies taxes on feminine products.

“Women in South Asia generally face a culture of silence dictated by injustice and misogyny,” said Anuki Premachandra, research communications manager at Advocata. “[As a nation], we are far from where we once were, but we have a long way to go. The role of a women is still widely seen and conﬁned to the role of a caregiver and the battle to defy this norm is one that we ﬁght daily. Although the country was ﬁrst to have a female prime minister, women are not seen as often as they should be in leadership and political roles. This is quite possibly also why high taxes on an essential like sanitary napkins exist and haven’t been challenged by anyone until the Advocata Institute shed light on the numbers.”

Advocata Institute’s vision for Sri Lanka is that the country becomes more free, open, and prosperous. The organization’s work aims to create a Sri Lanka with an abundance of opportunity for anyone to work hard and succeed. Becoming a voice for change: Advocata deftly steps into a sensitive policy ﬁght.

In a country with 4.2 million menstruating women, only 30 percent of them use sanitary napkins. That’s because, until recently, Sri Lanka taxed sanitary napkins at over 100 percent, making it unaffordable for many poor women to afford this basic need. Because most women cannot afford sanitary napkins, they resort to using cloth rags instead, which present sanitary and health concerns. This injustice went unchallenged for years because the female menstrual cycle is considered “unclean” and off limits by many in Sri Lanka. Many women are unwelcome in their homes and at school while menstruating. The Advocata Institute took on Sri Lanka’s culture of silence with a microphone, disseminating groundbreaking research on unjust taxation until government ofﬁcials were forced to take action. Thanks to Advocata’s efforts, the 30 percent import tariff on feminine products in Sri Lanka was eliminated. The total tax on feminine products has been reduced to about 63 percent from the previous 101.2 percent, and Sri Lanka’s ﬁnance minister, Mangala Samaraweera, told the Thomson Reuters Foundation he was looking into how taxes on sanitary products could be reduced further.

Advocata knew that limited access to sanitary napkins was harmful, but they needed to know why and how it was affecting women. Because of the sensitive nature of the feminine tax reform ﬁght, the group wasn’t able to leverage human stories to explain why the issue is so important. They had access to data on girls missing school because of their periods and general attitudes toward the female cycle from UNICEF and other groups—but they knew they needed more. To that end, Advocata commissioned a consumer survey to learn more about how limited access to sanitary napkins was affecting women in Sri Lanka. What they learned was that at least up to 50 percent of low-income women did not use sanitary napkins.

Alternatives to sanitary napkins, such as rag cloths, are unsanitary and unsafe. But because of the cultural stigma surrounding women’s reproductive health, policymakers are unaware of how this unhealthy alternative affects women. Poor hygiene caused by the use of rag cloths can lead to cervical cancer, which is the second-most common type of cancer among Sri Lankan women. According to the HPV Information Center, current estimates indicate that every year 1,721 Sri Lankan women are diagnosed with cervical cancer and 690 die from the disease.

“The mere fact that a necessity as this is taxed so high goes to show how misrepresented women are in the real world here,” Premachandra said. “We grow up in a culture where the topic of menstruation and womanhood is hidden and not embraced. A tax burden like this only does more injustice to a woman’s dignity.” Armed with the facts and more detailed insight into the issues plaguing Sri Lankan women, Advocata was able to zero in on effective messaging and a persuasive argument on why the country needed to reform the way it taxes feminine products.

Public outcry caused the government ofﬁcial in charge of tax policy to examine the issue. Ultimately, he ended up cutting the tax. “Freedom of trade will make goods and services related to female hygiene more available through this single reform,” said Dhananath Fernando, COO of Advocata Institute. “Importantly, this will provide the opportunity for better the menstrual hygiene behaviors of females, who make up 52 percent of the population in Sri Lanka.” The tax reduction on sanitary napkins is an important step in a longer ﬁght Advocata plans to tackle related to economic freedoms in their country.