Freedom to move in Kathmandu 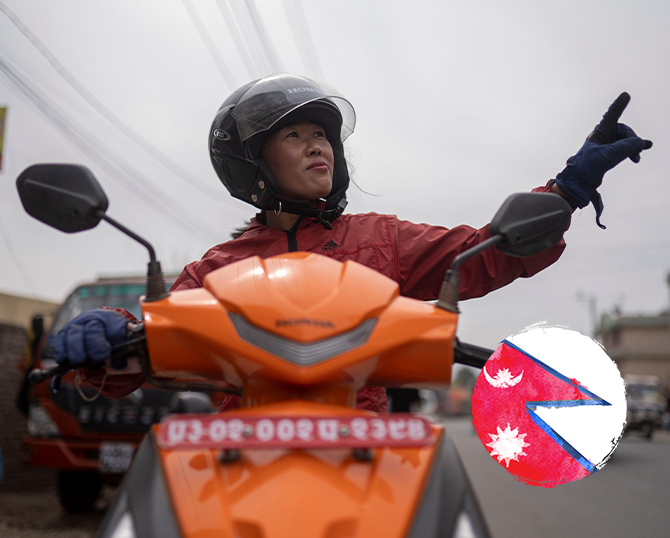 Nepal is a landlocked country wedged between India and China in the Himalayas, with gigantic mountains, incredible natural beauty, and irreplaceable World Heritage sites. The country is multicultural, multilingual, multiethnic—rich in diversity, and endlessly interesting. Despite globalization, Nepal has preserved its ancestral cultures. This both reflects the country’s ethnic and religious diversity and reverberates in the country’s economic growth.

When one digs deeper into the root cause of Nepal’s widespread poverty, one finds that Nepal’s economy lacks the entrepreneurial dynamism to innovate as a result of arcane and obsolete regulatory requirements to launch a business. Entrepreneurship unlocks the potential for growth—but in a country such as Nepal, an entrepreneur needs to be adept in navigating government regulations and tailoring products to overcome cultural biases. Sixit Bhatta is just such an entrepreneur.

Bhatta’s creativity and vision are providing freedom of mobility to thousands in Nepal. His solution to the challenge of public transportation is changing lives in many unanticipated ways. He’s an engineer by profession, and Tootle, the company he founded, is Nepal’s first ride-sharing app for two-wheelers. Within the Kathmandu valley itself, there are over 3.2 million two-wheelers, and Bhatta realized that there was an opportunity to start a business that combined the growing market for rideshares with a readily available resource.

As a ridesharing service operated by privately owned vehicles, Tootle is technically illegal under the country’s 1993 Motor Vehicles and Transport Management Act. The Act does not allow citizens to register new businesses in a nontraditional industry. So Bhatta had to register Tootle as an information technology company—even though its major focus is in transportation.

Nepal’s arcane laws and regulatory barriers make it difficult for aspiring entrepreneurs like Bhatta, who are using innovative tools to create jobs and opportunities, to do business. When the project first launched in 2017, traffic officers used the service to hail rides—and then fined the drivers for illegal activity. The public was furious. So Prime Minister KP Sharma Oli instructed the Ministry of Physical Infrastructure and Transport to back off. Bhatta was able to get Tootle back online, but its status remains somewhat ambiguous.

Entrepreneurship is one side of the coin for economic development—the other is advocating for sound policies that will lead to social change. Samriddhi Foundation, a non-partisan think tank in Nepal and an Atlas Network partner, has been a strong ally of entrepreneurs like Bhatta for years. Samriddhi, which means “prosperity” in Sanskrit, has spent years sowing the seeds for the removal of outdated laws that affect entrepreneurs through their research and advocacy work in Nepal.

According to Robin Sitoula, executive director of Samriddhi Foundation, there is a taboo against using the word prosperity that extends to the ideas of entrepreneurship or free-markets in Nepal. The idea of entrepreneurship is considered a foreign concept, and people feel that it drives crony capitalism instead of innovation. The notion that it will create prosperity does not connect well with the traditional mindset of Nepalese.

With US$100,000 in support from Atlas Network, Samriddhi Foundation has the resources they need to break down barriers standing in the way of innovators like Bhatta.

Breaking barriers for the underserved

Tootle is providing freedom of mobility to people in the Kathmandu valley, but for people who are marginalized, like women and people with disabilities, access to personalized transportation is life-changing. They pay less for a ride to work with Tootle, and they can travel free from harassment and discrimination. Before Tootle, blind and less-abled people had few options to get around. They couldn’t drive, and public transportation was extremely difficult to use. The company has also taken steps to provide opportunities for women. Anyone with a driver’s license is eligible to be a driver—and Tootle encourages women to apply. They’ve also taken steps to ensure that women are safe, both as drivers and as riders.

Bhatta is hopeful that the laws to start and register a business in Nepal will allow for innovations like Tootle, and Sitoula agrees that change is absolutely necessary for Nepal to grow. Samriddhi’s efforts to reduce administrative hassles and remove regulatory barriers can help uplift the business environment for entrepreneurs and drive Nepal towards prosperity. “One entrepreneur doesn’t solve all the problems,” Sitoula told me. “But if we allow or if we enable an environment to create a million entrepreneurs, a million problems will be solved.”