Improving quality of service to mothers in need 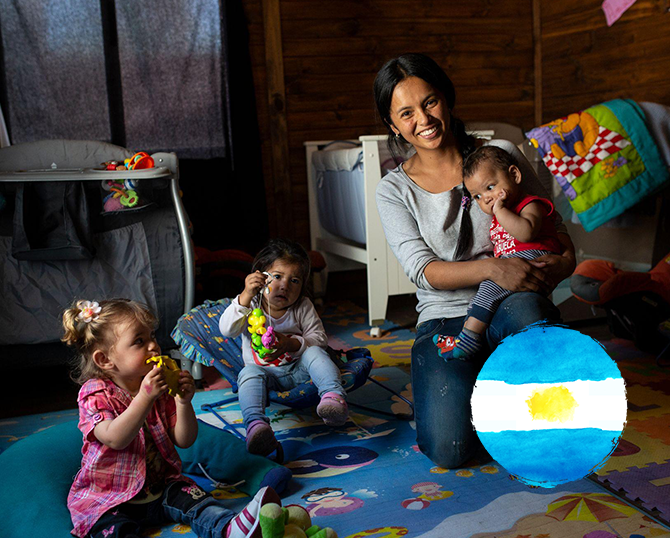 In the early morning haze that blankets Tigre—a vast and quiet neighborhood an hour away from the hustle and bustle of Buenos Aires—the only sounds are those of children running through the streets and the howls of stray dogs following behind. This is not a wealthy neighborhood—hundreds of children are waking up hungry and there is little to eat. This is not unusual for Argentina. Nearly a third of the country’s population lives in poverty, and this corner of the country is far away from the prosperity of the capital city. Despite its challenges, Tigre is not without hope, thanks to Centro Conin.

Meeting the needs of the hungry

“Child malnutrition is a big problem spread throughout the country,” explains Pilar Rodriguez Caseres, a social worker at Centro Conin. “This hunger is one of the most difficult sensations to explain. You can talk about it in words, but it’s an experience. It’s an experience we need to work against, so that every child can develop and grow because they deserve to reach their full potential.”

Launched in 2012, Conin’s main specialties are its services for malnourished children and children with developmental delays. A dedicated team of pediatricians and nutritionists evaluate each case with special care, helping families get on track with a set nutrition plan, providing education, and ensuring that children are getting their nutrition needs met in a safe, clean environment.

Conin also provides education—both for children and mothers. Montessori-style kindergarten classes teach younger children basic skills while instilling in them a love of learning and a sense of wonder at the world around them. Mothers participate in nutrition and breastfeeding classes, as well as sewing, craftsmanship, theater, and cooking workshops to help them build skills to care for their families and find well-paying jobs.

Centro Conin sees dozens of children and families a week. Before 2017, all of its records were kept on paper, prone to damage, misplacement, and misorganization. That changed when Libertad y Progreso (LyP)—with US$18,000 in funding from Atlas Network behind them—succeeded in campaigning for the removal of a laptop tariff. They worked with the Macri administration to repeal a 35% tax on all computer imports, which inflated prices beyond the reach of many people. Now, parents, school teachers, and small businesses are no longer paying double what their neighbors in Chile pay for the same technology, streamlining the services they are able to provide.

Conrado Etchebarne, who is part of Libertad y Progreso’s communications department, has seen how technology is making a huge difference for people working in health services. Before computers were available, no one was keeping records of diseases, treatments, or even basic information about each child.

Picking up the forgotten

“Children and mothers used to vanish from the health system,” Etchebarne said. “But now with Conin—which picks up the forgotten people and restores them to life, with an identity in the healthcare system, and keeps a detailed record on laptops and computers of the health and medical history of children and their mothers—they can take care of themselves in the future.” Rodriguez and her team can now organize and access every case file with the click of a button, and health records and nutrition plans can easily be created and tracked.

While it may seem like a small thing, the ability to digitize records has led to leaps and bounds in the quality of care Centro Conin has been able to provide. Local mother Sonia began bringing her son, Junior, to Centro Conin programs every day in March after noticing developmental delays and a lack of stimulation. The Montessori-style classes made a huge difference for Junior, and Rodriguez was able to easily keep track of his progress and plan for classes that would help him continue to grow. Another mother, Gabriela, came in to seek help for her daughter who was born severely underweight. Conin was able to provide both nutritional therapy for Gabriela’s family, as well as access to the foods her daughter needs to grow and get healthy.

The ghosts are again people

“Thanks to the computers, the neighborhood families who were ghosts in the health system are again people, who can take care of themselves, prevent illnesses, and have a better quality of life in the future,” says Etchebarne.

The residents of Tigre, Argentina, now have an even better opportunity at improving their lives and claiming their inherent dignity, thanks to a simple tariff repeal that came due to the efforts of an Atlas Network partner.