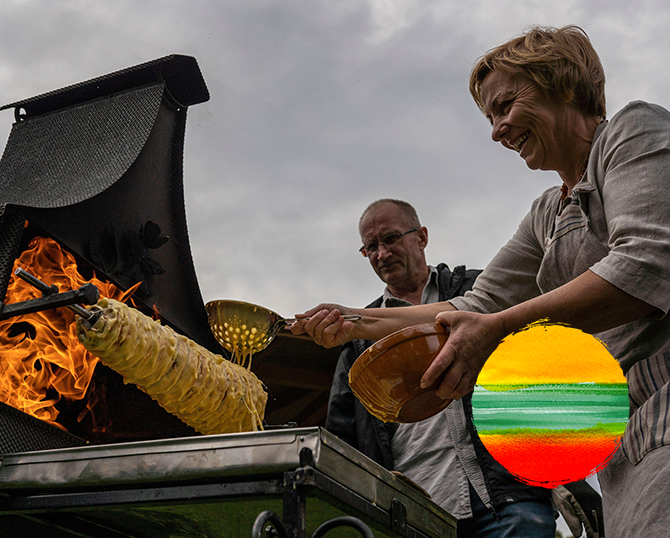 Around the world, small side businesses and “micro-enterprises” represent a way out of—or a defense against—poverty. In the post-Soviet Baltic state of Lithuania, these types of opportunities constitute 16–22% of the country’s gross domestic product. Lithuania offers affordable small business licenses that allow individuals to bypass much of the burdensome, expensive, and time-consuming regulatory red tape that hinders many startups. Those licenses—and the opportunity at a better life they enable—are under constant threat from big business interests and ambitious regulators. But opportunity has a champion in Lithuania.

Ona Raudeliūnienė is a librarian in Zūbiškės, a small rural town in central Lithuania. She supplements her income by 30–40% by baking a traditional Lithaunian cake—called a šakotis—for her clients. She pays for a small business license each year in order to legally make and sell the cakes, which cost her €210 in 2019.

Šakotis are time-intensive to make. Ona spends two hours mixing flour, sugar, eggs, sour cream, and butter into batter, then spends five to six hours in front of a birch wood fire spit-roasting each cake. The effort pays off, though. Šakotis are well-loved in Eastern Europe and the Baltic states, and they date back centuries to the Polish-Lithuanian Commonwealth. Not only are they a delicious treat, but they are also synonymous with celebration.

“I remember from my childhood that during all very important festivals of family, you see šakotis on the table,” says Edita Maslauskaitė, former vice president of the Lithuanian Free Market Institute (LFMI), an Atlas Network partner based in the capital city of Vilnius.

As Ona turns the šakotis—a name meaning “tree with branches”—on the spit, she slowly pours more batter over the cake. It cooks in layers reminiscent of tree rings. As it grows, she starts to turn the spit faster, eventually forming spikes resembling branches around the central cylinder. Eventually, the cake is pulled away from the fire, taken off the spit, and served.

“Out of poverty with dignity”

By making and selling šakotis under her small business license, Ona both functions as a successful entrepreneur and preserves a cherished cultural tradition. These easy and affordable licenses allow about 100,000 Lithuanians to legally supplement their full- or part-time jobs while allowing them to take small risks in testing out new business ideas. This opportunity has not always existed, however, and the threat of losing it again is very real.

Small businesses like Ona’s—empowered by simplified licenses—have overwhelmingly positive effects, both for individuals and families as well as the Lithuanian economy as a whole. They create a way for entrepreneurs to move out of the shadow economy into fully legal operations.

“These business licenses are a really good opportunity for people to get out of poverty with dignity because they refuse to receive social benefits and to be dependent, and they are trying to serve the community,” Maslauskaitė explains, pointing out that the path to entrepreneurship is open to all, regardless of education, capital investment, or government subsidies.

Despite the obvious benefits, these licenses are not without opponents. Some in government and big business are threatened by the healthy competition, and have made repeated moves against the program.These moves have included attempts to limit the reach of the program or shut it down entirely. Childcare, automotive repair, and construction services have already been removed from eligibility, and the fees for others have been raised. More may be removed soon.

Luckily, people like Ona are not without allies in the effort to keep business licenses available. The Lithuanian Free Market Institute, founded in November 1990 shortly after the former Soviet republic gained its independence, is often a lone voice in defense of the opportunities the licenses provide to tens of thousands of would-be entrepreneurs in Lithuania. Whenever a new proposal threatens the livelihoods of license holders, LFMI is there to communicate the positive benefits that the licenses provide Lithuanian society. With US$34,000 in funding from Atlas Network, LFMI is well positioned to champion and defend this life-changing opportunity.

“People like Ona often say that it would be too complicated to run a business and carry this heavy tax burden that otherwise falls on business companies,” says Aneta Vainė, vice president of LFMI, who is quick to make the case that these licenses provide both a bulwark against and a gateway out of the shadow economy in Lithuania. By allowing people to engage in economic activity while paying a modest, lump-sum tax, productive and peaceful activity is encouraged. If these licenses were to be taken away, such activity would likely still commence because weddings will always need cakes and busy parents will always need childcare.

The team at LFMI is adamant that the simple business licenses allow people to work with dignity in adding value to the lives of others—and the simple brilliance of that model allows for 100,000 Lithuanians to improve their lives without needing any mandate or direction from anyone else.