Registering To Be His Own Boss In Nepal 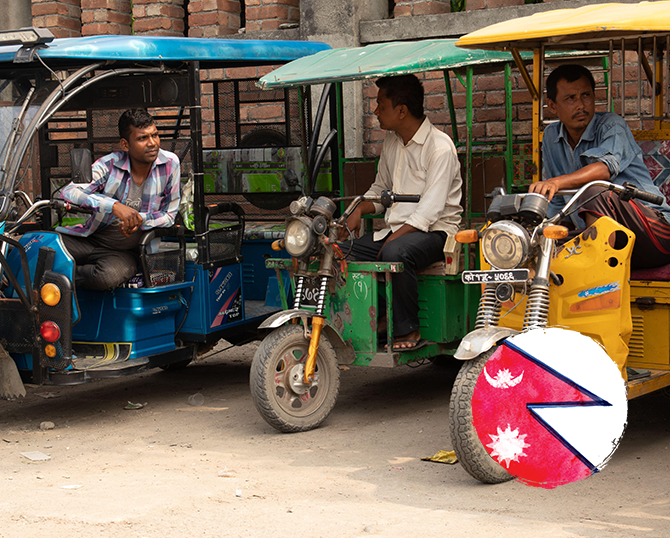 For many people in South Asia, owning and operating a rickshaw is often the most viable option to earn a living and provide for their families. As their own bosses, they have agency to do business how they see fit, flexibility to determine their own schedule, and the dignity of self-reliance. Many obstacles stand in these individuals’ way, however, with government-imposed barriers hindering their business activity and denying their rights. In Nepal, Atlas Network partner organization Bikalpa, An Alternative has championed the rights of rickshaw drivers in their country.

Bureaucratic obstacles needlessly complicate entrepreneurship in Nepal. E-rickshaws—three-wheeled, electric rickshaws—represent a convenient means of transportation for customers and a business opportunity for enterprising people. According to Gopal Bhujel, the president of the e-rickshaw union, the local government capped the number of those who could legally operate an e-rickshaw at 300 despite popular demand for several hundred more. As operators continued to enter the market, the number of unregistered—and therefore illegal—vehicles reached 1,800 at the very least.

Bhujel worked day and night to change this situation, writing letters, visiting offices, and even holding a rally, but to no avail. That’s when he heard of Bikalpa’s Let Us Earn Our Living campaign, and with their combined efforts, they convinced the government to begin to change its approach. Describing why it was important for his organization to get involved, Basanta Adhikari, founding chairperson of Bikalpa, an Alternative said “Until there is economic freedom, holistic growth of the individual is not possible.”

Working for a family’s future

Ram Mahato works hard to provide a good life for his family, which includes his wife, two children, and his parents. He wants his daughters to have more opportunities in life than he had, so Ram and his wife pay for them to attend a boarding school near their home. Ram’s wife works as a seamstress, but he found it difficult to make a successful start in the business that he hoped would provide him with the flexibility and livelihood they needed.

Building his own fresh start

After Ram returned to his family in Biratnagar, Nepal from a job as a migrant worker outside the country, he purchased an e-rickshaw that would allow him to earn a living while taking control of his own employment. Especially after bad experiences he’d had in other jobs, it was important to Ram to be able to take care of his family on his own schedule, which driving a rickshaw allowed him to do. His old bosses didn’t care if he was sick or hurt, they wanted the work done. Working independently would mean he didn’t have to worry about that anymore.

No room for unregistered vehicles

That turned out to be easier said than done, unfortunately. Ram had to take out a loan to buy his vehicle, which added to his need to get to work. He also ran into problems getting his rickshaw registered when the dealer ran into problems with the bureaucratic process. Because he didn’t have a registration number, Ram’s friends shunned him and even tried to get the traffic police to impound his rickshaw. The police fined and harassed him, which made it extremely difficult for him to do his job and earn money to take home.

A joint effort to realize rights

Ram participated in the e-rickshaw unions efforts to convince the government to register more vehicles. For a long time, he was frustrated with the lack of results and the government’s disregard for the rights and livelihoods of drivers like him. When Bikalpa joined their efforts with the trade union, officials were forced to pay more attention. Bikalpa pointed out that e-rickshaw drivers are Nepalese citizens and thus have the same rights as those who work in any other industry. By refusing to issue vehicle registrations, the government was making it difficult or even impossible for the drivers to live and work in Nepal. Between Bikalpa’s arguments and pressure from the trade unions, the government was convinced to issue nearly 1,400 more e-rickshaw registrations.

A job free from harassment

Now that Ram has a registration for his vehicle, he can operate much more freely. He can offer his services to customers in areas of the city where he previously risked large fines for driving. Problems remain, such as poor road conditions, continued police harassment for dress code infringements, and limited parking. Even so, Ram is thankful for the work that Bikalpa did to convince the government to recognize his right to earn a livelihood and allow him and his fellow drivers to work in their chosen profession.

Because he could register his e-rickshaw and can now work without fear of punishment from traffic police, Ram can support his family, send his daughters to school, and take care of his parents on his own schedule. Atlas Network partners such as Bikalpa are removing obstacles to opportunity and prosperity around the world, allowing people like Ram to lead their own way out of poverty with dignity.

Atlas Network supported the work of Bikalpa, An Alternative through grant funding.