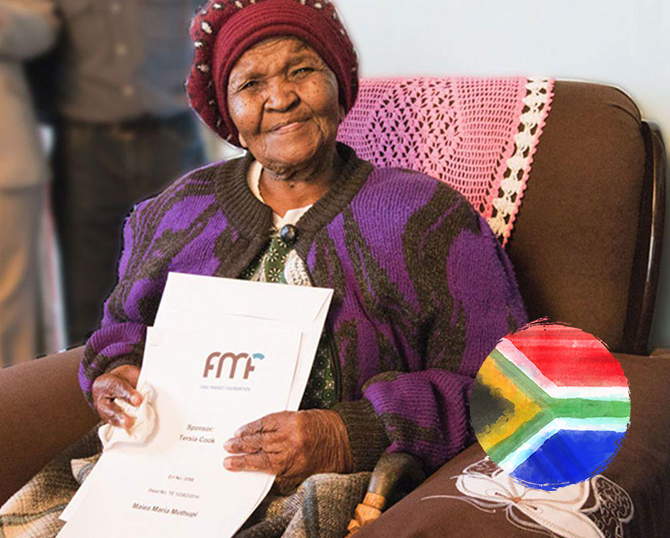 As Mrs. Maria Mothupi held the official deed to her land for the first time, her face spread into a wide smile. Until she was 99 years old, she had never experienced living in her own home or in a home legally owned by her family, because she was only two years old when the 1913 Land Act banned land ownership by black people in South Africa—a law that continues to have consequences today, despite its repeal more than two decades ago. That law has hindered the prosperity and denied the inherent dignity of so many South Africans, but one organization is working to fix that.

“I can sleep well now,” said Mrs. Mothupi. She knew at last that she would have an asset she could pass on to her family—something she had not previously had the legal right to do. This unlikely happy chapter toward the end of a hard life came about thanks to the Khaya Lam (My Home) Land Reform Project of the Free Market Foundation (FMF), an Atlas Network partner in South Africa. FMF’s pilot project focused on the Ngwathe municipal area of the Free State province, where the organization’s director, Eustace Davie, estimates that there are about 20,000 houses for which the ownership rights have not been documented and registered.

The Khaya Lam project is a living example of a truth expressed by Sir John Templeton: “Property rights are essential for human rights.” This project is unlocking freedoms that have been denied to black South Africans for more than a century. Empowered by a US$18,000 grant from Atlas Network, the Khaya Lam project has already provided resources to carry out the conversion of some of these properties—out of an estimated 5 to 7 million that are eligible countrywide—to freehold title ownership in the hands of beneficiaries.

Since economist Hernando de Soto published The Mystery of Capital in 2000 based on decades of research by Atlas Network partner Instituto Libertad y Democracia in Peru, it has become clear that the legal titling of property rights is a powerful means of uplifting the poor. De Soto’s message was so clear and compelling that his ideas came to be championed across the ideological spectrum, inspiring the World Bank to launch its “Doing Business” report series and earning respect from world leaders like former U.S. President Bill Clinton, who called de Soto “the world’s greatest living economist.”

The work is not over

The expansion of property rights in South Africa has been slow, however. Remedying the situation requires more than just educating the intended beneficiaries about their rights. Distrust, ambiguity, and prohibitive costs have all worked together to prevent a more rapid transfer of otherwise available titles. Through bulk processing and other measures to increase efficiency, FMF has reduced the cost from about $378 to $122 per title deed.

“Those who have been deprived by a racially biased law of the right to own property in land in their own country for 78 years cannot possibly understand the effects that such deprivation has,” Davie said. “Black South Africans have had occupancy rights in state-owned rental housing in separate apartheid townships built especially to house them in proximity to ‘white’ towns and cities. FMF’s Khaya Lam (My House) Land Reform project was initiated because two decades after the end of apartheid, millions of black South Africans are still living with the insecurity of title they had under apartheid.”

Hope for a better tomorrow

Large-scale success with Khaya Lam would provide a counteracting force to the slide toward socialism that is currently occurring in South Africa. With increasing numbers of low-income people owning their own homes, their perspectives about the value of property rights would change dramatically.

“Our task is to make everyone in the country aware of how the country will change for the better if we can extinguish the effects of one of the greatest crimes of apartheid: depriving black South Africans of property rights for 78 years,” Davie said. “Calls for information are coming in from all over the country. The process has now been proven. Our challenge is to get as many people as possible involved to get the job done countrywide as rapidly as possible.”

While there remains a long road ahead for Khaya Lam, for those it has reached it represents hope for a more prosperous, more dignified future as South Africa slowly heals from Apartheid.