The technology to succeed 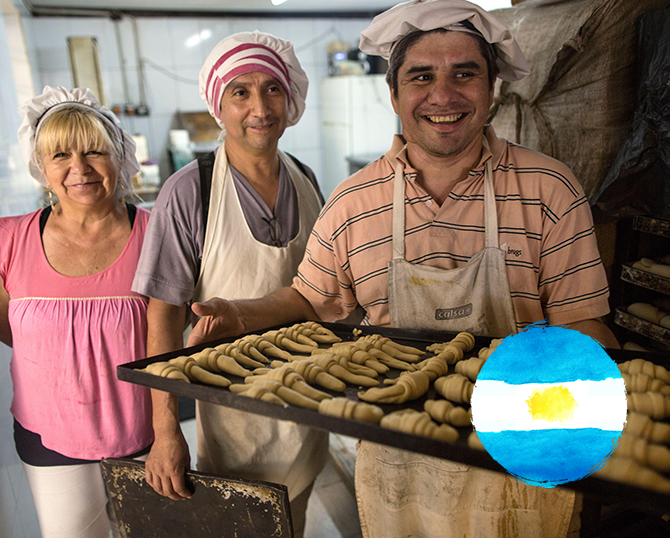 The smell of freshly baked pan dulce fills the air outside of Cooperativa La Juanita, a brightly painted cluster of community buildings in Buenos Aires’ La Matanza neighborhood. Located in a busy urban neighborhood about five miles outside of Argentina’s capital, the cooperative has a full slate of educational programming and growing business enterprises and is often filled with people of all ages, many of them actively engaged in learning new trades or skills.

Making their own opportunities

The broad range of services, programs, and classes available reflect a deep commitment to entrepreneurship. La Juanita began in 2001, after a group of locals decided that they did not want to rely on government welfare handouts, and today it features a bakery, a call center, a mechanical repair shop, catering services, and classes teaching English, computing and animation techniques, beautician and barbering skills, music and dance, and even personal finance.

“We started as a cooperative formed by a group of unemployed workers who rejected the government cash transfers in the 2001 crisis, because we wanted to generate our own source of work and provide local people with a quality education,” said Silvia Flores, who was one of the founders of the cooperative and now serves as its executive director.

The tools to flourish

Access to computers has been an essential part of the cooperative’s flourishing, but they haven’t always been affordable. For years, a 35% tariff on laptops and small electronics raised their price tag by over 200% compared to what consumers in neighboring countries paid for the same products. Libertad y Progreso—an Atlas Network partner in Argentina—recognized the challenge this posed to educators, entrepreneurs, and everyday people and worked to have the tariff repealed. In 2017, they succeeded, empowered by a US$18,000 grant from Atlas Network.

This one small policy reform made it possible for La Juanita to purchase new computers and help even more students build skills that could lead to greater job opportunities. The cooperative’s new call center, which has become a source of local jobs, is staffed primarily by graduates of the computer education programs. Recently the call center landed high-profile contracts with banks and other major businesses, creating new avenues for future job growth.

There's nothing abstract about jobs

Agustín Etchebarne, the general director of Libertad y Progreso, knew that lowering the tariff would have a powerful impact on people who were struggling to make a living. “Many people believe that public policy that makes computers cheaper is an abstract achievement,” said Etchebarne. “But there is nothing abstract about creating new jobs for poor people. And in the midst of the recession that Argentina is muddling through, there are few things more important than getting a job.”

At “La Masa Crítica,” the onsite bakery, Argentine specialties known as medialunas (croissants) fly out the door. The head baker, Miguel, and his team are happy that their baked goods—which they sell at a lower price than most local bakeries—are in demand. La Masa Crítica, roughly translated to mean “critical mass,” has a double meaning, as the word masa in Spanish can mean either “mass” or “dough.” When La Juanita was in its infancy, regional government administrators told La Juanita’s organizers that they couldn’t form a cooperative without a critical mass of support—and they openly doubted that the neighborhood could support the founders’ vision.

Fortunately, the bureaucrats were wrong. When it came time to name the bakery, La Masa Crítica seemed like the perfect answer. Today, the bakery is part of a strong and vibrant community that serves the needs of thousands of local residents every year.

“They come in at 4 a.m. to bake the best bread in the neighborhood,” said Fabián Hamed, the cooperative’s president. “It’s more than just a salary. Our colleagues know they are helping others—and because they are also earning money, they see the possibility of getting ahead.” Hamed, who also runs Potrero Digital, La Juanita’s technology and digital design management program, speaks proudly of one of his former students, Carlos, who now teaches baking skills to others. Hamed sees firsthand what a difference Carlos’ impact has on his peers in the neighborhood. “Thanks to Carlos, these guys have a future. They are not on the corner drinking alcohol or using drugs—they have skills and can get jobs.”

“What I love about La Juanita is that they did not accept government welfare,” added Etchebarne. They wanted to get out of poverty by themselves—so they found a way to train and create jobs.”

With a focus on innovation, discovery, and creating opportunities for the community to prosper, Cooperativa La Juanita is looking to the future. The founders’ hope was to create a space that fostered prosperity for all without being dependent on government aid, with the vision that their efforts would lead to a better world. “We wanted and still want to show that we can get ahead by our own means, with dignity, effort, and work,” said Flores.